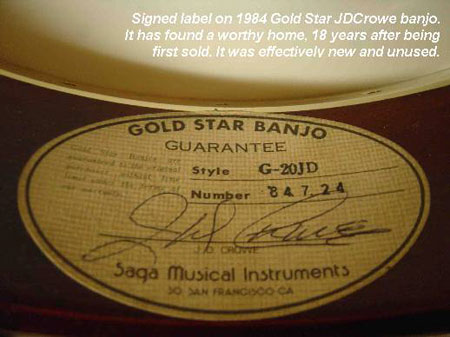 Vintage Gold Star - Richard Keldsen of music wholesaler Saga in So. San Francisco, CA, was responsible for the excellent Gold Star banjos, as well as the Kentucky and Saga Mastertone style banjos, 1976-86. Richard has an original RB75 from which dimensional data and the tone ring formula for the 1978-86 flathead banjos were taken. These banjos have the prewar form factor tone ring with the longer skirt than current USA practice. The tone rings were made at the Takeuchi metal works factory, with the possible exception of some JDC's. Gold Star flathead and 40 hole archtop rings are the same shape as the prewar Gibson rings, which the entire current crop of flathead tone rings (with the notable exceptions of JL Stull #4 and #12, rings supplied in Huber banjos, Woodhill Bell and Burlile) are not. The current rings have a slightly shorter (about 1/16") skirt. This includes McPeake, Huber (rings for the aftermarket, not in Huber banjos), T20, FQMS, Kulesh, Liberty, Bucks County, StewMac/Ryan, N. Georgia Music, etc. If you put a JLS ring on a regular height pot, including Asian banjo pots, you get the fit with the free inner lip. See the Tone Bell® write up at Bill Palmer's site.

The banjos were made by various vendors in Japan over the 8-10 year span. I understand the first ones (76xxx) were made by world class mandolin luthier Sumi. Main production following that up until about late '81 was at the Tokai factory, then difficulties caused an abrupt stoppage of production for about a year+. This is why banjos with serial numbers reflecting '82 or '83 very rare. Late production was by a small maker (1 or 2 men) with the same metal parts as the Tokai production, since these parts were from a separate vendor. A small production also happened at the Kentucky brand mandolin factory (in Japan) which I believe was owned by Keldsen by then. Late production is identified by serial numbers indicating 1983 or later. There were a very few top tension models also, the preponderance are regular Mastertone replicas.

FURTHER: NONE OF THIS INFO IS DEEMED 100% accurate, being partly assembled from best guesses. And anyone who is living in the delusion that they will ever get the true, full Gold star history here or ANYWHERE is sadly mistaken. The only real source is Richard Keldsen, and he has specifically declined to expound for the public on numerous occasions.

This is pretty much all the information I have to offer, and it will allow you to identify and date your banjo. Also, due to repeated requests for me appraise player's Gold Star banjos, I need to mention again that I have learned not to value instruments sight unseen and usually not then. Put another way, please do not ask me to tell you what your Gold Star is worth. I appreciate receiving information, serial numbers, details, etc. to build a better picture of the marque, especially about 6 string or top tension models, but I will not appraise instruments. (o:

Serial numbers: I believe the serial numbers reflect the approximate date wholesaled by Saga USA. It seems the banjos were built in batches, and then numbered in the USA as they were sold. The last batches of Gold Stars all seem to have been made about 1984, but bear serial numbers 84xxxx, 85xxxx, and even 86xxxx including at least one JDC that went through Mandolin Bros. The first digits reflect the year labeled, the following 3 or 4 are in some kind of a sequence I have not figured out yet. The shifting value of the yen and the improved quality of Gibsons made the market for Gold Stars shrink dramatically by 1986, and Saga ceased to offer them.

82xxxx or 83xxxx serial numbers are very rare in GS flatheads, but they do exist: 1982, 1983. Archtops were the main line at that time, due to the cessation of production at Tokai mentioned above.

Model number code: GF-100-HF, 4 pieces of information to the format below.

At the Anaheim NAMM trade show in January 2004 the first production unit reissue Gold Star banjo was shown as well as the prototype from the July show and IBMA. Again called GF-85, they are visually, materially and dimentionally similar to the old Gold Star GF-85 and/ or 1930's Gibson RB-75/ RB-3 design that those were cloned from exept there are no rings in the resonator as on the 75. They are mahogany with leaves and bows as inlays, a one piece flange with a Gold Star manufactured 20 hole flat head long skirt cupric alloy tone ring.

Here are some pictures of the first one, #0300001 that was flown over for the January trade show in California. 3/4 GF-85 back, GF-85 front. 3/4 GF-85 front, yours truly playing the GF-85, and finally the man behind it all with Gold Star and Saga, our benefactor Richard Keldsen, with a stunning Blueridge (Saga) BR280 guitar in solid fiddleback Brazilian rosewood and spruce.

These are not the same animal as the typical Korean Masterclone. The Korean made instruments have a certain ambiance and some are good, while some are PR, decoration and hype over performance. These reissue Gold Stars come from an almost clean slate and are made in China on new tooling, with an aim to replicate 30's Gibsons with a few modern touches like a geared 5th. Only the totally satisfactory (Japanese) Presto style tailpiece is tied to prior tooling.

Neither are they the same animal as the wonderful Japanese made Gold Stars described above. The Chinese do not have the masterful touch that the guys who made the 70's/ 80's ones had.

I have played a number of production items and the parts are good, in the tradition of the old Gold Stars if not as well finished. The neck is excellent. However, based on 8 production instruments I have seen that were all shipped together to a dealer, IMO it is essential that someone with real setup skills go through the instrument. These 8 had QC, setup and shipping damage issues, and sound-wise ranged from dud (1) to joyous (#030079). If you buy one online or by phone from a dealer with no proven in depth setup services without you actually playing it, you are on your own. To repeat again, travel and try, it is the way to assess the dealer's setup. The sound is the proof and reason to purchase, not the average of comments on an internet discussion list.

Here is the essence of the August 2003 faxed Saga product description to the dealers. It is a quoted directly; the italicized text are my comments and additions. I have no more information to offer than is already here on the site, on specification, comparisons to the sound of Tom Adam's Gold Star, etc... what you get here is it.

At the 2005 NAMM show, the GF-100 was announced. Basically identical to the GF85 except for an ebony fingerboard with a choice of Hearts and Flowers, Flying Eagle or Wreath patterns, one piece neck (with ears glued on?) and 2 concentric rings on the resonator. Retail list price is US$1695. Again, the plastic case is preferable and will need to be demanded. Present delivery is guessed to be in summer of 2005.

My assessment of the Saga CP-1530 Golden Gate blow molded plastic shell banjo case - this is by far the best support and protection for the money today at US$110 list price plus shipping/ tax if any, with the following features/ caveats:

It is difficult to find these cases offered by a brick and mortar store that knows enough to tell you all this stuff up front, or has one so you can find out if your banjo will fit. eBay style retailers are even less likely to know. A few returns because a banjo will not fit, and a merchant could be soured on the case in spite of its attributes. I think this has happened.