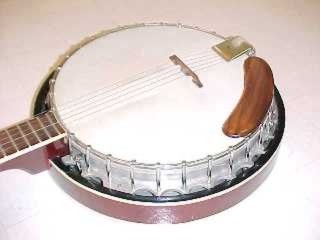 For an overview of Asian banjos, see the Asian Banjos page. This page has the listing of inexpensive instruments only, the better quality banjos are described on other pages (see yellow menu above).

This basic list came from Wayne Norman. I've added to it and commented on some of the banjos I have seen.

These are the general features found in the entry and advanced amateur banjo brands. Cataloging these totally is probably an impossible task, but I'll take an initial shot at it. There will always be exceptions. The notations of style are mine, picked with the hope that gradually I can define more of the specific instruments.

The wood is usually some fairly rapid growing tropical hardwood like Philippine mahogany, Nato, and the such. Exceptions do exist.

There are about five categories of pot construction.

Four types of resonator if present:

Some other nifty features encountered are veneer overlay on the fingerboard, painted on binding, color in finish only including binding like a plastic overlay, welded steel tension hoops, cheap steel tailpieces, wooden armrests, and the neck held on with a single eye bolt set into the neck heel and screwed into a big cadmium plated coordinator rod nut.

Any of these names may be encountered on higher quality banjos....or other instruments.

Andrews - These are NOT the banjos currently made by the Andrews Banjo Company of Napa, California, email: to . These domestic banjos are quality instruments; Mr. Andrews makes all the wood parts, cuts and inlays all the pearl and abalone, and makes all the tone rings and coordinator rods. Almost no one makes these parts themselves, so these are certainly true custom instruments. That the names are the same is coincidence, the difference in quality is obvious.

Antoria - Samick brand name from August 2002 on in UK, earlier us exists but source unknown.

Blue Ridge - A Saga brand. I don't know if there were any better quality ones.

C. F. Mountain - notice the similarity to C.F. Martin. There were guitars too, circa 1986 or so: the script logo was a direct knock off. One piece cast archtop pot with the arch machined to below the outer rim, resulting in a flathead. Nice mahogany neck, thin wall resonator. 4, BT. ATR

Echo - This may be the 70's Italian made banjo for very questionable quality and a high price in Italy, or a stencil brand...

Gamma - 4, BT, KR, eagle decals on reso inside and out, Korean made, block inlays.

Gremlin - rebranded Ashbury Aug 2002 on in the UK.

Ibanez - Full line of banjos, including nice ones. See link to page 2, top of the page above.

Iida - Full line of banjos from Al pot entry level to masterclones, including Korean in the 1990's. Current models include the 230 and 230T (tenor) with H&F, shoes and brackets, resos. See link to page 2, top of the page above.

Kasuga - there were nice mandolins in this product line, similar to Ibanez ones. --- were there any nice banjos?

Kawai - stencil brand, presumably for the piano company. Japanese, 60's, seen with small resonator, solid bridge, and tailpiece like the cheap Stella guitars of the 50/60's. Early in the Japanese learning curve.

Kay - Probably Korean (3 screw truss rod cover), with the circled 'K" logo like the domestic ones. 4- GT. Also seen on eBay, a very fancy Alvarez built one from the rarely 70's, with the wide edge resonator with marquetry on BOTH the top and bottom, mirror image, eagle on back, 4 gold guitar tuners, rosewood reso, multi ply built up blonde neck, circled logo, and a warranty card referring to Kay Instrument Sales in Chicago. This would seem to be right near the end of domestic production for CMI (Kay, Stella, Harmony, some Regal) which ended in 1974.

Lero - I have now seen one of these; it really does say Lero and not Leroy. 3, GT, CR, 3 plates to the resonator.

National - 4, GT, guitar-ish peghead, reso unclear in the picture, 14 inch reso, pre Korean still with the thick edge, plastic block inlays, Brand on a stuck on label. Typical late 60's/ 70's banjo boom product. Not the same instruments as those built by the Doperas....the trademark was owned by another company (one of a long succession of owners of the National name....)

Paramount - sadly too. Apparently someone has put the Paramount name on cheap Asian banjos, which is like calling a paint by number painting a daVinci. The 20's-30's ones and the Orpheums were the brainchildren and product of W.F. Lange (all genuflect and intone "laaaaaange"......)

DX 61, with integral aluminum flathead rim/tone ring cast as it were a full-sleeve archtop tone ring, save that the inner rim would not raise the head, resting instead a hair width below it, thus creating an effective resonance air chamber. Probably the same as the C. F. Mountain pot described above. Hex bracket shoes, block inlays. Stamped Iida patent.

Ranier - early 70's like Alvarez resonator, thick wall, reddish/ black rosewood, marquetry, eagle decal inside, looks like eagle inlay outside of reso but could be a decal under the finish, 4 PT, pretty flashy, still a modest instrument. Seen on eBay.

Rover - RB20 open back, RB25 with bound mahogany resonator. Current. Plastic rim in a similar way to the Bakelite ones of Kay, Harmony et al from the 50's and 60's. Saga import, GT, open back, wonderful fast mahogany neck with bound rosewood fingerboard which is the exact same shape as the neck on Richard Keldsen's RB75. (see the Gold Star write up)

Since I am reliably informed these will outperform a cheap (Asian usually) wood rim banjo when properly set up, Richard has thus been responsible for giving the banjo buyer value at both ends of the spectrum. Read on:

Wayne Norman recently bought one of these banjos and wrote this about it. Pretty interesting.

"There has been one banjo (of many) on eBay for the past few months called "Rover." It looked pretty good on the screen, so what the hay...I bought one for a little over a hundred bucks. Came with a nice gig bag.

"It's pretty well made, the rim is a little different from the Harmony Res-O-Tone, having a small flange for the hooks. The neck is quite good, rosewood FB, guitar tuners, good frets and binding, and very well (Gibson) shaped. Has a real working 2-way truss rod. The action is very good. 5/8" bridge and No-Knot TP, and Vega hot dog arm rest. Neck is mounted via 2 lag screws, with a single co-rod.

"BUT, the tone was pitiful for a clawhammer banjo. It came with a Remo head, the new thin one, in high crown. The tension hoop is thick, but not too high, so it was way down past the top. No matter what I did it still sounded lousy. Tried different strings, bridges, head tension up and down the range.

"Then I put on one of the new Gold Tone GTS pre-mounted skin heads ($40-$50 - ed). It comes in low crown so it fit right. The tension hook nuts dug into the plastic flange, so I put small (#6) washers under the nuts and it works better.

"The tone now is amazing. It has that old timey thin wood rim tone. The Gold Tone head resurrected this banjo. I have to say it is a pleasure to play. The head has remained nice and tight and shows no signs of humidity sensitivity."

About a year ago I saw something in the Interstate Drum catalog. Remo introduced a new drum head called Renaissance. It looks like the old high quality near-clear calfskin heads rarely seen today. The only banjo size was a 12". I had built a 12" deep-rim banjo with a Tony Pass block pot. I finally got around to putting it on, and was very impressed with the brilliance and depth of tone it produced. Now Ramsey is using them on his 12" model, and had Remo make it with a banjo size collar and crown height and in 11" also. Donald Zepp and Elderly now carry them, and I got some 11".

I took the skin head off the Rover and put this on. What a tone. It's somewhere between a regular Remo and a Fiberskyn3. The clarity of notes is what makes it different. Easy to get different tone from it by adjusting head tension.

So Wayne got a frailing banjo that is a pleasure to play for about US$150. Damn good deal, although bear in mind this is a rock bottom price he found. A much more likely overall price is around $200, all up, with the opportunity to have the instrument in your hands and assess it at your local music store before parting with cash.

RB30, RB35, RB40, RB45. Built on cast aluminum pot in various degrees of embellishment. The RB45 can be set up to be very nice sounding. Current production.

Saga - Presently have entry level and travel banjos only.

They also brought in a kit with the aluminum straight wall archtop pot with hex shoes for he brackets, in open back form for $120 (?), or with a very nice resonator for $130 in the late 70's. The pot was similar to the domestic Stew-Mac Eagle 99, but not quite as heavy. Came with 3 different qualities of tuners at different times. Living in Seal Beach at the time, I put one of the first ones together together as a beach banjo. It was finished with marine varnish and with a sea lion inlaid in the peghead. I had the neck x-rayed in my dentist's office to determine where the truss rod was, so I could thin the neck without breaking through.....

The present Saga Style III is very similar to the kit except the Style III has the present common thick wall (Korean) resonator, a bound fingerboard and nice tuners. It looks like the cast in archtop is still there, but machined below the surface of the head to create a flathead. I have seen this conversion on a C. F. Mountain. At a street price of around $400, this is a pretty good workhorse.

Samick - Sam Ick company, Korea, builders of about 1/2 of the world's guitars in 1999. Will put your brand on. Customers include Gibson (Epiphone), Washburn, Oscar Schmidt, etc. Daewoo (like the car) is the other major Korean supplier of hardware.

Sierra - imitation h&f inlay, hex shoes, wood pot, 14" reso. (1, KR). Absolutely no way connected with the Deering Sierra, which is a nice if simple professional banjo made in the USA. Deerings say Deering on the headstock, not Sierra......

St George - very early Japanese banjo brought in by Tony George of Troy, NY. He claimed to have been to Japan to teach them how to build guitars. Crusty Armenian, he ran George's Music in Troy where I went to college. It is where I bought my first (no name) Japanese banjo for $22. & also my first Martin.

Tradition - Not the same as the Tradition banjos made in the San Fernando Valley in the 60's.