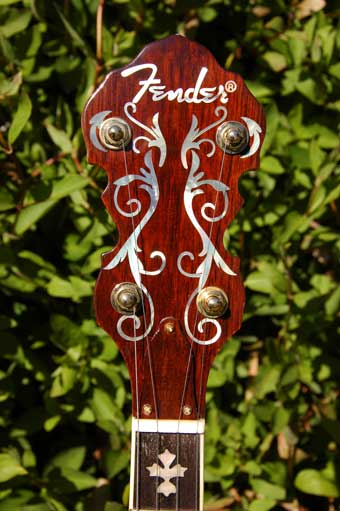 Aida (sometimes also read as Jida, but it is actually Iida) - See Iida on the G-K page.

Antoria - Samick brand name in the UK at least from August 2002 on. Dot inlay tone ring banjo seen on a site in the UK.

Aria - Full line of banjos from cast aluminum pot entry level to Masterclones. Aria Pro is early 70 RB 250 replica, with similar inlay, big clunky chrome tuners, one coordinator rod, 3 resonator screws, one piece flange, non brass tone ring, copying the interim Gibson RB 250 version before 71. A gold plated one was available very early on for under $300. (Gibson 71 and later into the 80's has two piece flange, pearloid buttons on offset gear tuners). Pro II was a closer replica of the the later RB250.

Alvarez - Early 70's banjos, usually bow tie fingerboard, delicate and unique filigree peghead inlay with die cast flathead tone ring, 3 resonator screws, cast flange with a the holes being an oval with a larger circle in the middle of it, like a current Deering flange but without any points into the hole, They were pretty good value for the money. Some have been reported to have the brass rod ring under the tone ring like the Tokai Blue Bell and Orpheum. Thin wooden shell.

From Wayne Norman, who has acquired one:

Has inlaid name "Silver Princess" on the headstock, but no mention of Alvarez anywhere. This is a copy of a Vega Tub-a-phone open back. Early 70's. Chrome plating.

Tone is quite good. One of the best sounding Tub-a-phones I have heard. Clear, crisp, and bright up and down the neck. with a new Fiberskyn 3 head.

I've seen a second one of these, not flamed inside the reso, no washers on both the coordinator rods at the neck end, it appears to be holding the neck to the tailpiece side of the pot (!). This one had no S/N and model number tag. The owner also called it an Alvarez Eagle, so maybe it is a slightly different model.

A third one is different still: Labeled Whyte Eagle, the banjo weights approximately 13.5 pounds; the neck and resonator is made of curly maple, resonator is finished on the outside only, inside has a dark stain applied to the exposed wood and the lip of the resonator is half round inset to accept the flange. The neck is butterfly with a thin piece of ebony running down the center. The head and heel are black acrylic, ebony fingerboard with mother of pearl inlays. The fingerboard and resonator are trimmed with cream binding. The pot is 7/8 inch thick ten ply veneer maple, two piece flange with 24 hooks/ nuts. The tone ring is chrome plated bell brass 40 (note the difference to the above) arch top with It has a replaced tortoise shell tail piece. (The original was also a tortoise shell) The heel is carved, the bottom of the heal is black acrylic with a mother of pearl inlay. It has a chrome armrest and had a fifth string slide capo, (6 - 12 fret) originally. Brown hard-shell case, $900.00 and change paid for the banjo and case in '78.

The owner wrote, ".........I bought it brand new in 1978. This is a complete hand made banjo and there is not a single flaw in the construction. All the binding is tight fit and perfectly smooth surface. All the inlay has exact fit with all round edges round. No flat mistakes. The sound is superb, out of the box. In my biased opinion, this banjo is as good as they come. I have seen several high priced banjos with bad bindings, flat spots on inlay and inlay that does not fit."

Around 1980, Silver Belle model was a Mastertone clone with an as yet unknown tone ring, 2 piece flange, H&F, mahogany, chrome(?), Presto, Silver Bell on the 21st fret, nice detailing.

Japanese from the early to mid 70's, the top of the pot is the contour of the inside of the tone ring like some Tokai's, and does not touch it...same idea as the Bill Palmer Tone Bell™. If you have further information on Argus banjos, please send information to the owner, on this fascinating instrument, which seems to be built just as the Japanese were getting the hang of it and trying some things too. Here are some pictures of the head and inlay on his "Foggy" model banjo, definitely non Gibson: Head, lower neck, upper neck, pot profile.

Bluebell - Ibanez in the Japanese market, made by Fujigen. See Ibanez.

Contessa - I've seen a Mastertone pattern one like the early bowtie Alvarez above. Die cast tone ring (hb-120V?). There are also West German built banjos with the Contessa name, no relationship to the Asian ones. They were a second brand of Framus, can be identified by the multi lamination neck and a radiused (arched) fingerboard, and distinctly non Asian design.

Electra - Apparently Iida built for an importer in Australia. One the apparent equivalent of Iida 231 seen on Australian eBay. Other models in the then current range are possible.

February, 2009:  From a friend down under, photographic confirmation that the name is "Electa," not "Electra." His photos reveal a decent looking banjo with a peculiar, hollow, Bakelite rim. The rim is not one-piece like the famous Harmony rims; instead, this piece of Bakelite is molded to the shape of a wood rim. The banjo has a metal tone ring and flange and is constructed just as it would be with a wood rim. With the resonator in place, it is hard to tell that the rim is not wood.

The correspondent reports excellent tone but is nonetheless converting the banjo to an open back and installing a wood rim.

Epiphone - Gibson marketed, looks like a Samick/ DaeWoo Korean combination product. 1996 MB250 masterclone tone ring is 1# 12oz AL or pot metal, 2pc steel flange. I had one that is pretty well dialed in, it was OK if not great. I was willing to put it into airline baggage (in a Leaf case).

Fender (Korean) - FB58, current, seems to be similar to BC Cho. Die cast tone ring, like the Epiphone MB250.